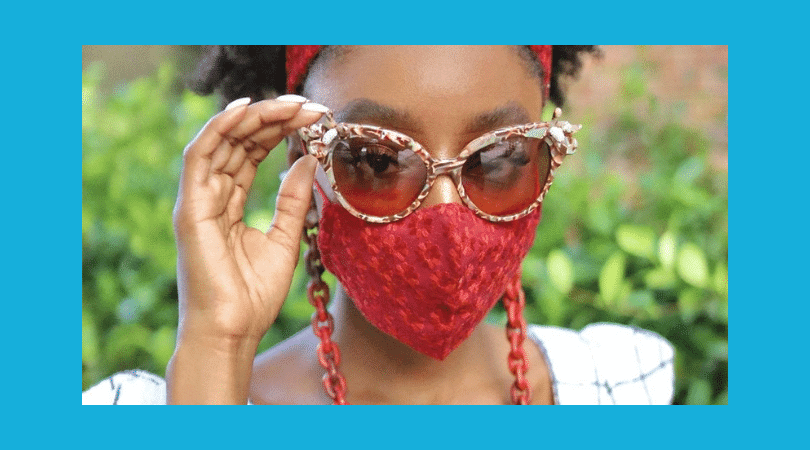 Soon after the face mask became an essential accessory, designers swept in with their own versions: masks made of silk, tweed and satin; decorated with fringe, bows and sequins; for daytime and night-time; for weddings and political rallies.

When it became clear that we’d be wearing masks for a while, some added another element: a chain or lanyard for safekeeping (and extra flair).

“It’s a cool accessory piece that falls in with the other necklaces, but it’s also functional,” says Karen Perez, whose company Second Wind helped catalyse the trend with gold, silver, gunmetal and Lucite chains that hang from its hand-cut linen and silk masks.

Previously reserved for librarians and extremely athletic people (we see you, Croakies), such retainers have been gaining purchase with stylish wearers. Jewellery designers and other fashion-adjacent professionals have been making their own. Major retailers like J.Crew, Free People, Fossil, Ann Taylor and Banana Republic sell them, and thousands more can be found on Etsy. Celebrities including Jennifer Lopez, Mindy Kaling, Elle Fanning and Busy Philipps have been spotted wearing them. (After losing several cloth masks, I’ve become a mask-chain enthusiast too; my favorite is made of plastic rainbow links and was clearly marketed towards children.)

Lele Sadoughi, who designs jewellery and accessories, began producing masks this spring. After a flash of inspiration, she had her team take new photographs of her line of sunglasses chains to show that they could be used to retain masks as well.

“We went from selling a few dozen a week to selling hundreds a week,” Sadoughi says. “It’s almost a million-dollar category for us now.”

Perez started Second Wind in the summer, after months of living off savings; her work as a stylist had dried up early in the pandemic. On 21 July, she announced a pre-sale on Instagram, expecting around 100 orders. Within 24 hours, she had sold 10,000 products.

“I didn’t have that stock,” says Perez. “I didn’t even have that much fabric.” To prepare the orders, she worked 20-hour days for seven weeks, with her family members helping her out in the mornings and evenings.

The buzz really ramped up when big names caught wind of Second Wind. Alexandria Ocasio-Cortez, for instance, visited Perez’s studio in August; this month, she wore a Second Wind mask and chain when she was sworn in for her second term in Congress. J.Lo has also been photographed in a Second Wind design. Perez says that Bloomingdale’s, Amazon and Selfridges are among the major retailers that have asked to carry her products, but she has turned them away. She isn’t ready to scale her business to that level. (As of now, Perez works with 40 artisans, and her sisters handle logistics and marketing.)

The lifespan of a mask chain may seem limited, like that of a mask itself, but Sadoughi believes the accessory will be useful even as more people are vaccinated. The Centres for Disease Control and Prevention recommends that even those who have been vaccinated wear a mask and socially distance for now: though tests of the coronavirus vaccines show that they’re incredibly effective, individuals can still contract the virus while the vaccines take hold, and could possibly still spread it – especially if they come into close contact with others or stop wearing masks.

Even as coronavirus infection rates fall, Sadoughi is betting that people will want to wear masks and mask chains on aeroplanes or on public transport. Perez says that Ocasio-Cortez made a similar point. “She said she would continue to wear a mask when she feels under the weather," says Perez. “It’s a way to show respect for other people.”

Whatever happens next, Sadoughi’s company has already benefited immensely from all the new customers the masks and chains have brought. In 2020, the company saw an 80 per cent increase in sales and five times as many new customers on the website as in 2019. Part of that was from people buying the masks and the chains, Sadoughi says, but many also purchased headbands or pearl earrings to go with their new protective accessories.

“Every other category has gone up,” says Sadoughi. “Our direct business has really exploded. We’ve had a record revenue year.”