London Fashion Week: What to Expect This Season 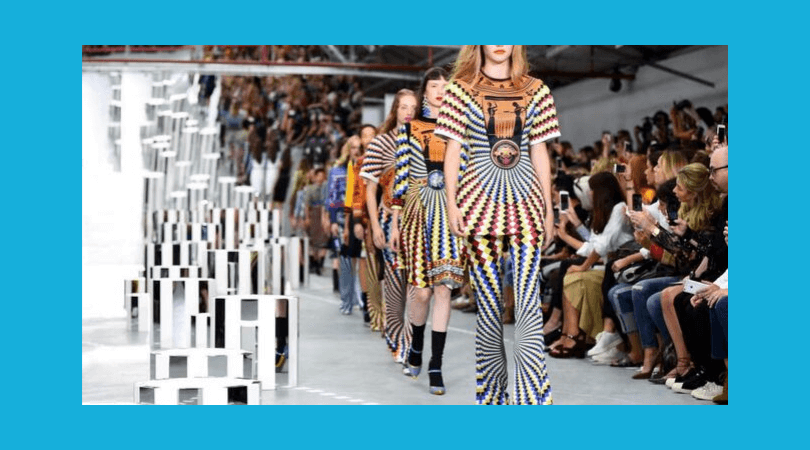 Over the course of five days, editors, buyers and social media influencers will come together to see what brands including Molly Goddard and JW Anderson have up their sleeves for spring/summer 2020.

But this September could mark the beginning of a seismic shift in the fashion industry.

With the increasing likelihood of a no-deal Brexit looming and environmentalists putting pressure on the British Fashion Council (BFC) to cancel fashion week altogether, there’s a very real chance that this bi-annual trade event might never be the same again.

From sartorial mastery to political shakeups, read on for everything you can expect from London Fashion Week this season.

Few fashion fans can forget the pivotal moment when Jodie Comer stomped across our TV screens in a frothy candyfloss-coloured gown. In the role of Villanelle, the Killing Eve actor accessorised her look with chunky black biker boots and a signature scowl. It made quite the impression. So much so, that designer Molly Goddard has become one of the most anticipated London Fashion Week shows ever since, with editors and influencers rushing to marvel at the Central Saint Martins graduate’s latest frou frou offerings. Last season, these included several tiered tulle gowns that came in neons, blacks and creams. But the showstopper was a devastingly dramatic fuchsia gown that featured so much tulle it almost tickled the toes of those on front row.

Meanwhile, British accessories maverick Anya Hindmarch is back with yet another playful runway, having previously entertained attendees with sets featuring chubby bean bag clouds and a giant woven tunnel. This season, Hindmarch will display her spring/summer 2020 collection in an immersive scarlet maze built inside Soho’s Brewer Street Car Park. We can see the selfies already #mazelife.

In a Fashion Week first, people can now buy tickets to the bi-annual event. While the BFC has previously hosted an additional ticketed event for the public, named London Fashion Week Festival, this September marks the first time that on-schedule designers will invite people to see their collections alongside industry insiders. Instead of putting on a single runway as usual, brands including AlexaChung, House of Holland and Self Portrait will host sessions across two days consisting of a catwalk show and a talk led by industry leaders.

Rixo is fast becoming one of those brands that even people who know nothing about fashion will have heard of. You might’ve seen its slinky leopard print gowns at weddings this summer, or spotted its retro swimwear making a statement on a sun lounger near you. You’ll undoubtedly have noticed at least one Rixo piece on your Instagram feed in recent months, thanks to its loyal selfie-taking fan base, which includes influencers, models and Vogue editors. Even Girls writer Lena Dunham is a fan of the British brand, having worn its Rosemarie dress to Wimbledon in July.

We can’t wait to see what Rixo has in store for spring/summer 2020; a collection they say will be inspired by the flower power haze of the 1970s (think whimsical Woodstock). Fans will also be able to shop the collection immediately after its presentation on Saturday by heading to Rixo’s pop-up shop located at 94 King’s Road.

Fashion is not afraid to get political. And in these increasingly precarious times, designers are becoming more outspoken than ever before, often using their catwalks as their very own Speakers’ Corner. Naturally, Brexit and the possibility of crashing out of the EU with no deal has become a primary concern, with the BFC saying the latter could cost the fashion industry up to £900m. Will the fashion industry voice its fears on the runway this season?

It’s likely that Vivienne Westwood will have something to say given her on-catwalk protest last season, which saw models and activists pontificate about the consequences of climate change and the economic ramifications of Brexit. We’ll also be looking at British brands with European creative directors, think Burberry’s Riccardo Tisci, who hails from Taranto, Italy, who may choose to celebrate European culture through their collections as the UK waves goodbye to its EU membership. Anything is possible.

How will London compare? For the last few seasons, body positivity activists have protested outside key shows over the lack of representation on British runways. Simone Rocha stood out last season for sending models of varied ages and body types down the runway in her princess-like gowns. But Rocha was an anomaly amid a roster of designers who seldom stray from the norm of casting whippet thin models under the age of 23. Here’s hoping for more diversity for spring/summer 2020.

The activists are calling for the BFC to cancel London Fashion Week altogether in a bid to address the environmental consequences of consumption and fast fashion.

Expect on-street protests – or “swarms” as the organisation calls them – to be taking place outside shows this season.

Extinction Rebellion’s Fashion Week activity will culminate with a “Funeral March” on Tuesday as a way of bidding goodbye to London Fashion Week for good as the group urges the BFC to replace the event with a bi-annual summit to address the fashion industry’s role in the ongoing climate crisis. Stay up to date with the group’s plans on their Facebook page.